Although we have no will for Roger Terrill of Milford, Connecticut, we do have a listing of his inventory, dated 22 February 1682.i

It reveals that Roger was quite well-off for the times, and, that he was heavily involved in farming.

It is seldom one sees in such a document phrases like.... "worne pen box," or, "A small black cow w[ith] a white face an very gentle".... nor the listing of not only the dung fork, but the "dunge 10 shilling."

Some of the items on the inventory bear explanation. Perhaps the most unusual on the list is "beetle rings." A beetle is a heavy round wooden mallet used to drive in wedges in carpentry work, and the head is bound with metal rings to keep the striking surface from splitting.

The "bill" is a bill-hook, [photo] an agricultural implement consisting of a thick, heavy knife with a hooked end. It had many uses, but was effective for chopping off small branches of trees or cutting apart entangled vines or roots. 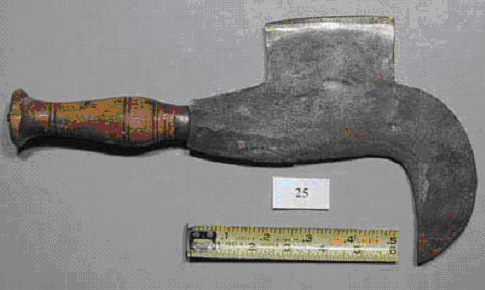 The "gridiron" is a platform of iron bars with short feet and a long handle for cooking meat over a fire. The "buck tub" is a washing tub.

The "whippletree" [photo] is a pivoted or swinging bar to which the traces of a harness are fastened and by which a plow or conveyance is drawn.

Roger put the whippletree to good use. He had "1 great plow," and, "one good plow" as well as "1 small plow, a harrow & teeth" along with lots of chains and "yoaks" for his four oxen.

Roger had plenty of land to put to the plow. We know this not only from the numerous land deeds dividing up his estate amongst his children after his decease, but also from the listing in the inventory. Besides the usual house, barns, orchard and homelott, his land holdings included the "...lott on bare [Bear] necke... the springlott... the great meadow...meadow at Creeke... oyster meadow... New meadow... the Rocke lott good and bad [another colorful inventory detail]... the land at Newfield... Wigwam lott... mill lott..."

The inventory listed 103 pounds of flax, and flax would have been used in his 5 yards of "course linnen," 17 ½ pounds of "course yarne," and 34 pounds of "loome yarne." Thanks to the sheep, some mattresses and pillows were stuffed with "flocks." Other stuffing material included feathers, straw and interestingly, "cattaile."

Roger's inventory shows not one, but two bibles, and other books as well. Too bad our meticulous inventory-takers didn't list the titles of those books.

So.... what does all of this tell us about Roger? We know he successfully represented his father-in-law when his son, John Ufford, was called before the New Haven court on a serious matter... "Rogger Terrill who spake for old Vffote"ii... so Roger must have had some standing in New Haven and perhaps some knowledge of law.

And, he may have had something to do with boats in coastal Milford as the New Haven town records show on 27 January 1668: "Tomacke, an indian, being accused of stealeing an Anchor with Perry from Roger Terrill of Milford & now examined, he Confessed ye fact, & was sent back to ye Authority of milford to bee dealt with according to law."iii

But it is Roger's inventory that identifies him as an undoubtedly industrious and prosperous farmer, who left an estate of over Ł678. By comparison, his well-connected father-in-law, Thomas Ufford, who signed the original Springfield agreement and served twice on the Connecticut Colony jury, left an estate "within the bounds of Milford and Stratford" of Ł289, which was so "much of it as was left."iv

Roger's wife Abigail (Ufford) made a will that was recorded around 1689, but sadly it was in the missing first pages of the second volume of New Haven Probate Records, and is thus lost to us, although the reference to it is found in the index.v

If Roger made a will, there is no record of it. This leads to some speculation that his death may have been sudden, as his land... which was referred to in deeds by his children as their "inheritance," and "shares belonging to me of my father's homestead"... was negotiated among his children after his decease rather than being an estate of "what was left."

Perhaps he succumbed to the influenza-like episodes that recurred in Connecticut during 1682-83.vi While for now we can only speculate on both Roger's origins in the Old World and the circumstances of his passing in the New World, his inventory gives us a tantalizing glimpse into his productive life.